Try answer this question in our climate test:
How much of the excess heat from global warming is captured in the oceans?

Most people don’t realise that almost all of the extra heat created by global warming ends up in the oceans!

This video explains why that is the case:

Most excess heat is hiding in the oceans!

Many of us look for global warming in our local weather but, so far, the weather changes that are caused by climate change are spread unevenly over the planet and you probably haven’t experienced much of it first hand. A lot of heat is actually trapped inside the atmosphere every day, but you can’t detect it by putting your finger in the air, because less than 1% of the excess heat stays in the air. Of the earth’s total surface, 71% is covered by oceans and that’s where 91% of the heat sneaks away. Over the last 50 years, the average temperature in the upper 75 meters of the oceans has increased by half a degree Celsius. That might sound like a small change, but the amount of energy needed to heat up that amount of water would be devastating if it had stayed in the air. 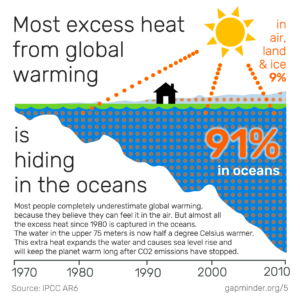 This also means that we should expect a very long delay when we finally manage to reduce the extra greenhouse gases we emit. When the same amount of heat enters and leaves the atmosphere every day, we will still be stuck with all the extra heat hiding in the oceans. From that moment it will probably take more than a century for the extra energy to eventually escape up into the atmosphere and out into space, where it should be. Not until that has happened can the average temperature in the air start sinking again.

Why is it a problem that people are wrong about this?

If you believe global warming is all about the air temperature, you’re not realising how much heat is accumulated. The oceans serve as a huge heat reservoir delaying the changes to the air temperature. The enormous amount of heat accumulated in the oceans will continue warm up the air and land for hundreds of years, even after we stop our greenhouse gas emissions. 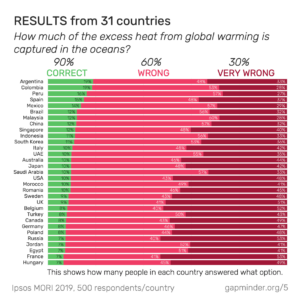 Why are people wrong about this?

Most people understand that the greenhouse effect is happening in the atmosphere, and that probably makes it counterintuitive to think that most of the excess heat it captures, ends up in the ocean. When media reports about climate change, it’s almost always focusing on unusual weather phenomena and warmer air temperatures, which are things that the media consumer can feel and see and relate to. While the slow and steady increase of water temperature is almost impossible to make an engaging report about. Most people seem to think of the word “climate” almost as a synonym for “the weather” or “the atmosphere”, while scientists who talk about the “climate system” are referring to the flows of energy, water and gasses moving between all parts of the system: oceans, land, plants, ice sheets and the air.

The United Nations’ Intergovernmental Panel on Climate Change’s Sixth Report had “high confidence” in the calculations about where the excess heat goes. Air temperatures are estimated across the world and therefore the energy captured in air can be calculated. Temperatures at different ocean depths have always been trickier to gather. Historic data came mainly from Nansen bottles until the 1950s when bathythermographs started being used.

During the last 20 years, temperatures down to 2000 meters have been measured with small ARGO floats which have covered almost all parts of the oceans since 2005. The ARGO floats sink to 2000 meters depth and then return to the surface to report their measurements. You can see the latest data from almost 4000 of them in real time on the Argovis map. Ship-based stations still dominate when measuring below 2000 meters, but recently the Deep ARGO floats started collecting temperatures all the way down to 6000 meters, in really deep water basins where no historic measurements exist.

Want to use the slides from the video in your teaching? You can download them here and use freely. 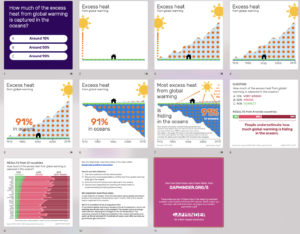 Want to try more questions? Go to our Worldview Upgrader.