This page describes how Gapminder has combined data from multiple sources into one long coherent dataset with Child mortality under age 5, for all countries for all years between 1800 to 2100.

— 1800 to 1950: Gapminder v7  (In some cases this is also used for years after 1950, see below.) This was compiled and documented by Klara Johansson and Mattias Lindgren from many sources but mainly based on www.mortality.org and the series of books called International Historical Statistics by Brian R Mitchell, which often have historic estimates of Infant mortality rate which were converted to Child mortality through regression. See detailed documentation of v7 below.

— 1950 to 2016: UNIGME, is a data collaboration project between UNICEF, WHO, UN Population Division and the World Bank. They released new estimates of child mortality for countries and a global estimate on September 19, 2019, and the data is available at www.childmortality.org. In this dataset, 70% of all countries have estimates between 1970 and 2018, while roughly half the countries also reach back to 1960 and 17% reach back to 1950.

How the sources were combined

In general, we connected our historic estimates from Gapminder v7 to the earliest available year with data in UNIGME or if it didn’t have data, we used UN WPP from 1950 and on until UNIGME had data. Whichever of these two sources has data first we smoothly transition our historic trend over a period of 20 years from the number in our historic sources to reach the level of the first data point in UNIGME or UN POP. This means that in the period 1930  to 1980, depending on data availability, different countries are moving between sources at different points in time. In most cases, the sources are very similar in the overlapping years. As in this example of Burkina Faso 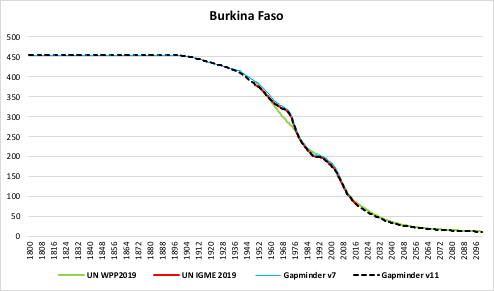 That describes the principle followed for most countries, but then we made exceptions in 53 cases where we preferred Gapminder’s handmade series instead of UN POP, for the period 1950 to the start of UNIGME data, because UN POP has smoothed their trends which makes events in single years (like genocides) not show up as dips or peaks in single years, instead, they are smoothly decreasing or increasing the trend over a decade, as, in this example of Argentina. 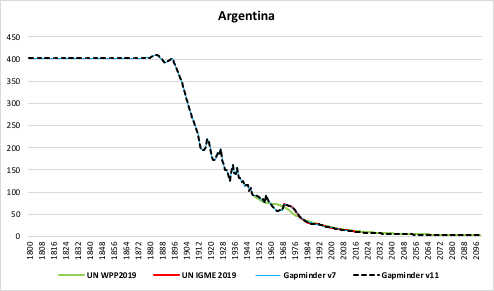 Also sometimes, the UN POP number is far away from UNIGME while Gapminder’s historic estimates tend to be closer. 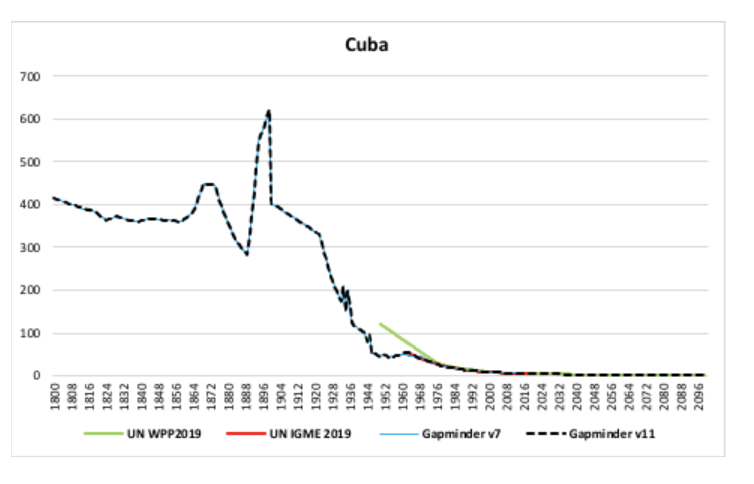 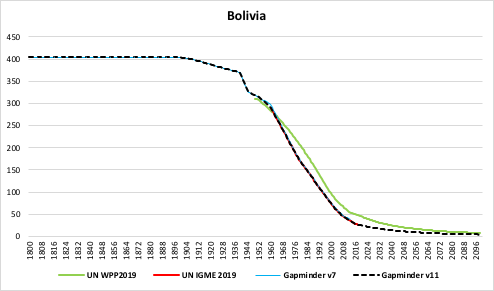 Our global trend for Child mortality rate is using the UN IGME data for the period 1990 to 2018. Before 1990, we used the weighted mean of countries’ data and after 2018, the series continue with UN POP change rates. The proper way to calculate the global child mortality would require estimating the total number of births and child deaths each year. But we don’t have good estimates of the number of births, so instead we have used a proxy: Fertility rate multiplied by population. This method gets us very close to the properly calculated UN IGME numbers. For 2018, IGME=38.6 and our weighted average=38.5. For 1990, UNIGME has 93.2, and our weighted average is 95.7. We have linked our weighted average for the world, to the UN IGME series, by using the rate of change before 1990, and apply that backward in time, so the whole series is moved down to meet UNIGME in 1990.

This graph shows four lines. The purple is our weighted average that is slightly higher than UN IGME in 1990 (the blue line). And the black dotted line is Gapminder v11 after the whole line is adjusted downwards to hit UN IGME in 1990. The green line shows UN WPP which has much fewer peaks than our trend because detailed yearly events are smoothed out over decades. 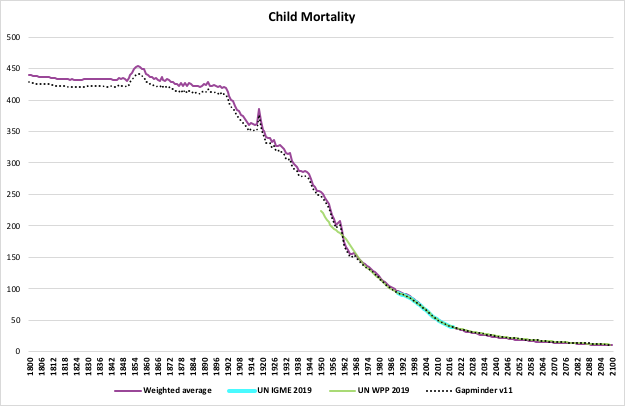 The regional averages were calculated with the same weighted method.

In the future version of our trend for Under-five mortality, we hope to include lots of more temporary peaks, by taking the guesstimated dips in life expectancy and estimate how much child mortality must have increased during times of catastrophes.

For transparency, we provide the files we used to calculate this data here. Any questions about the data and suggestions for how to improve it are always very welcome: in our data forum.

These are Gapminder’s historic estimates compiled by Klara Johansson and Mattias Lindgren.