We use the data from our own version 7 below, which is based on 100 sources compiled by Klara Johansson and Mattias Lindgren, Mattias also assessed the fatal impacts of the biggest disasters in history and made rough guesstimates showing in the charts as sudden dips in life expectancy.

How these three sources were combined

Whenever IHME has data we use it, which is for almost all countries and years between 1970 to 2017. The UN source has data between 1950 to 2099, but before 1970 we use Gapminder’s version 7 instead because the UN data is “smoothed out” and doesn’t show clearly which year a dip in the curve occurred. For years before 1970, we have taken Gapminder v7 and adjusted it during 100 years so that it meets IHME data the first year it exists, as in this example for China: 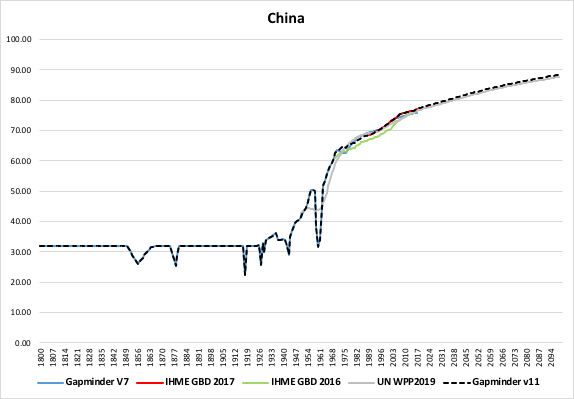 After 2017, we have extended the IHME series with the UN estimates and forecasts, as you can see with the Nicaragua graph below. But we haven’t extended it with the  UN actual number. We extended it with the UN change rate . In the example of Nicaragua IHME estimates, Life Expectancy in 2017 is to be 78.8 years. That is almost five years higher than the UN estimate: 74.07 years. This means that we use the expected increase from the UN for the year 2018 and beyond, but we apply it to the higher estimate from IHME. 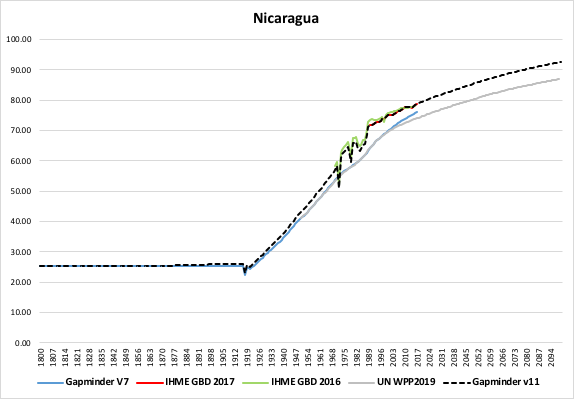 Another example of  Albania, where the IHME Life Expectancy in 2017 is 72.23 years. This is almost equal to the UN estimate: 72.33 years. This means that we apply  the expected growth  from the UN from the year 2018 and beyond to the estimate from IHME. 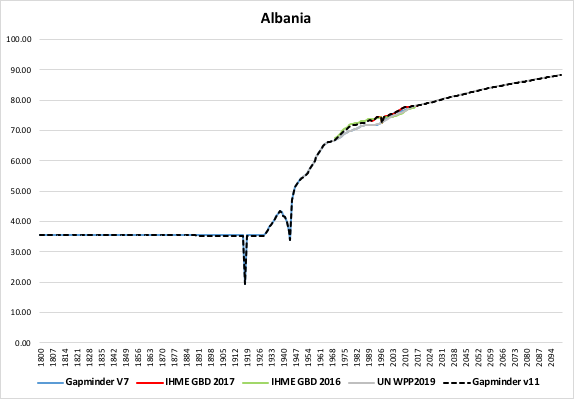 When we show data for 2018, that number doesn’t come directly from IHME, but it’s the 2017 number from IHME with the percentage change in UN estimate extending it to 2018.

In many cases, the new estimates from IHME improved a lot from the previous releases. This means that many countries moved their position in our chart when we updated the data and changed drastically because they improved their method of modeling HIV and other diseases. In previous Gapminder v9, we used the IHME 2016 data, which had a life expectancy for Iraq at 67.68 in 2016. The new IHME data puts it on 76.74, which is one of the largest changes. This shows up in this example, where you can see the light blue line of Gapminder v9, far below the updated lines. 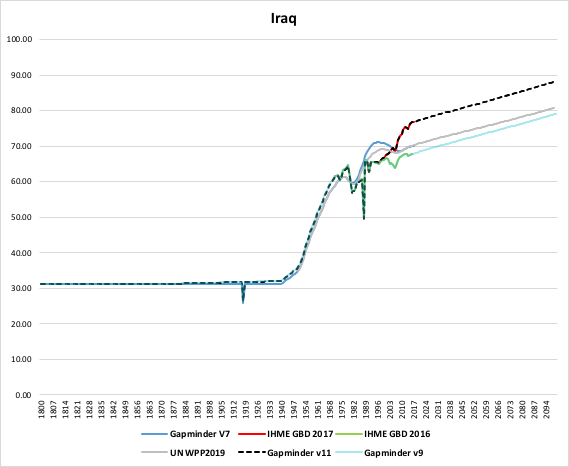 The global total life expectancy is using the IHME numbers from 1970 to 2017. For years before this period, we calculated the average weighted by population. The proper way to calculate it would be to account for the number of people of different ages, but that would require much more work. Our calculated weighted average, 2017: 73.13 years, is close to the properly calculated number from IHME, 2017: 72.97 years. After 2017, we have applied UN expected change to IHME estimates as it is shown in the graph below: 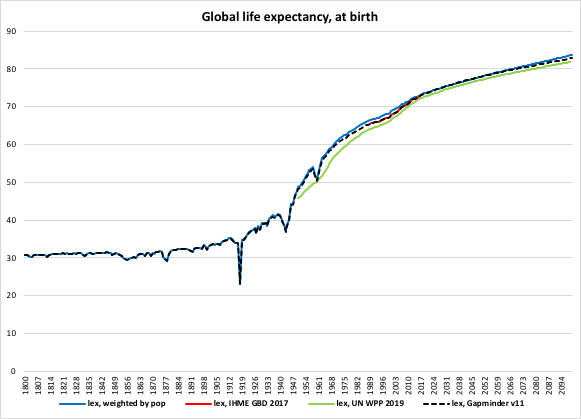 For transparency, we provide the files we used to calculate this data here. Any questions about the data and suggestions for how to improve it are always very welcome in our data forum.

» Excel with data, sources and other metadata – version 6

» Excel with data, sources and other metadata – version 5