In all low-income countries across the world today, how many girls finish primary school?

Do you know the answer? Most people don’t. One third of all monkeys do. This is Question #1 in the Gapminder Test 2018. I you haven’t already, please take the test with 13 questions, before you read on. (It’s the same test as in the book Factfulness. )

More than half of the girls in low-income countries finish primary school! The correct answer is C: 60% percent.

The official UN school data come from UNESCO, and the World Bank has calculated the number for so called “low income” countries, and it’s actually higher than what we just said: 63.2 percent in year 2015. We rounded it down to 60 percent to avoid overstating the progress, which people keep accusing us for. Now let’s see how people scored on this question.

We asked this question to the general public in 14 countries, in our Gapminder Misconception Study 2017. Among 12,000 asked only a fraction of  7% picked the right answer! 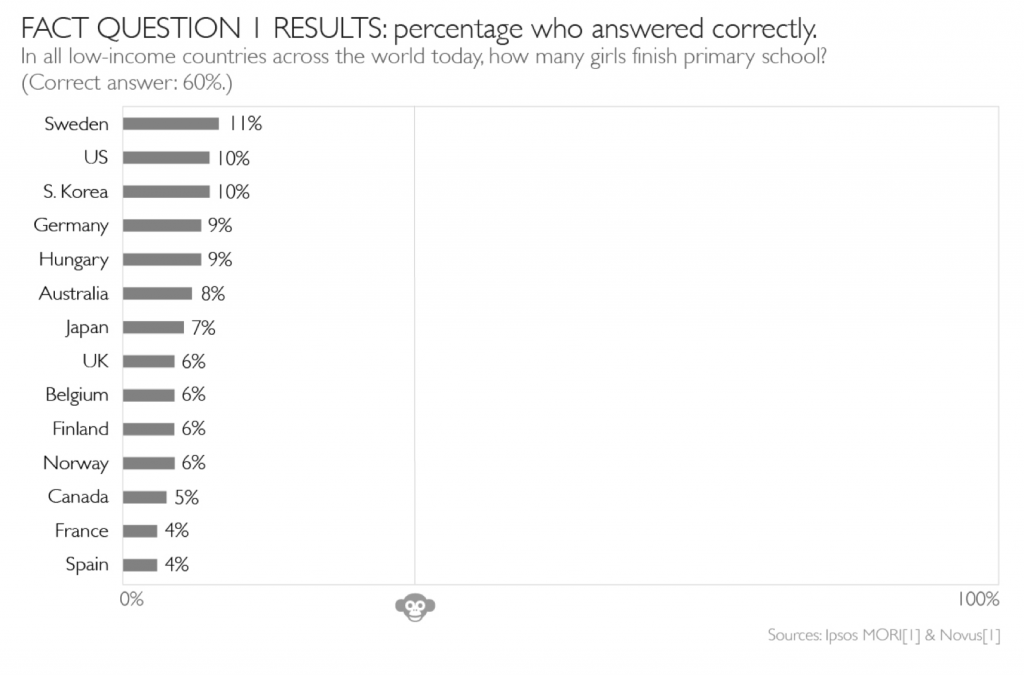 These surveys were conducted with Novus and Ipsos MORI.

We call the results terrible, because they are. With 3 alternative options, the chances of randomly picking the right answer is 33%. If people were ‘just guessing’ the average would have been 33%. And if a few people than actually knew the right answer, they would have pulled the total result up above 33%. Instead the the result was 7%! How is this possible?

Why people get it wrong

We’re asking about something that triggers vivid images of suffering and victimisation. That’s probably why the answers are so skewed. The phrase “girls in low income countries” probably makes people remember images of girls kept out of school in conservative cultures. The countries we asked were all high income liberal countries, where we see lots of news about oppressive cultures elsewhere, because it obset . see a lot in our news. Images from the places on earth where conservative male dominated cultures are still keeping girls away from schools. There’s no doubt that in some countries parents are still prioritising to send their boys to school and not their girls, because