According to the UN’s Population Prospects data, the world’s population is divided up like this: 1 billion people in the Americas, 1 billion in Europe, 1 billion in Africa, and 4 billion in Asia. You can find the full dataset (compiled by Gapminder) here.

Most people in the richest countries have been bombarded with images of overcrowded African cities. But the truth is, Africa ISN’T overcrowded. The entire African continent—which accounts for more than 20% of the world’s land area—contains just 1 billion people, or slightly more than 13% of the world’s population.

Only 28% of our respondents picked the correct map.

And there’s nothing to celebrate in the country-specific results, either. Australia were the top performers (if you can call it that) with 34% correct answers, while Belgium brought up the rear with just 21%.

Needless to say, all of them were VERY wrong.

So how do most of us find out about what’s happening in the world? Through the media. And what parts of the world are typically covered by the media? Well, a great deal of coverage is centered on:

As a result, most people have an unrealistic view of the importance (and population) of those parts of the world.

On the other hand—and for a whole variety of reasons—the media in the countries we surveyed rarely covers countries in Asia. The result? People assume it’s smaller and less important than it really is.

You can view the full dataset (compiled by Gapminder) here.

This time it was our US respondents who scored highest, with 36% correct answers, while Japan brought up the rear with just 10% selecting the right answer.

In many ways, the ignorance around this question isn’t very surprising. In nearly every rich country, the “ageing population” problem has received a huge amount of attention from the media, politicians, and educators.

Unfortunately, most of this attention hasn’t done a good job of explaining how ageing populations actually work. This leads many people to assume the average age of the world’s population will just keep going up in a straight line… which of course it won’t.

Right now, many countries do indeed have ageing populations, which are caused primarily by three things:

Yes, you read that last item correctly. Because so many people were born during a relatively short period of time—with fertility rates dropping off afterwards—that means there will also be a time where there is a particularly large cohort of old people. It’s the same group of people, just grown up. But fast-forward a generation or so, and—assuming birth rates remain fairly stable—a lot of this problem will be smoothed out.

But none of this gets a lot of attention in the media, so most people just aren’t aware of it. Add this to the misconception about birth rates causing rising populations, and you’re left with a lot of people who have very little idea how their world will evolve over the next eight decades. 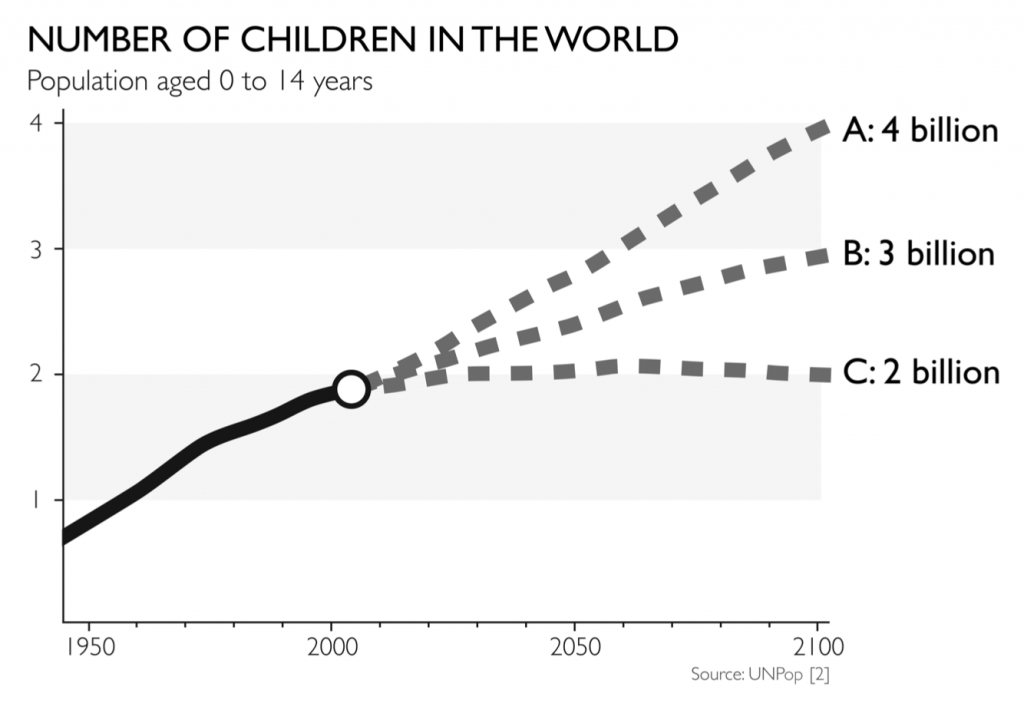 That means there are more people with access to good education, safe housing, and nutritious food than there are living in extreme poverty.

On average, 26% of respondents chose the right answer to this question, and only two countries scored better than the chimps (33%)!

A massive 72% of respondents thought most people live in low-income countries where  just 10% of the world population live.  So while 26% overall might not seem all that bad, in reality, it shows that almost ¾ of our respondents have a huge misconception about the world they live in.

The reality of today is that most people have their basic needs met. They have enough to eat, clean drinking water, at least basic medical care, and access to electricity and transportation. However, because this silent majority don’t show up in our news or social media feeds, it’s easy to become overly focused on the extremes.