Here we list all mistakes found since the first English language edition of the book Factfulness from April 2018. These errors will not be found in most translations. If you have spotted a mistake that is not listed here, please let us know so we can add it to the list and improve future printings of the book.

Send an email to [email protected]

Page 3, Test Yourself : Some translations of  Fact Question 1 has this problem

The English fact-question one reads correctly “In all low-income countries across the world today, how many girls finish primary school?” The term “primary school” refers to the five first school-years, roughly up to ages 11, with some variations across countries. In many countries the term “primary education” has no clear correspondence to commonly used terms in the national education system. In some translated editions of Factfulness, the term “primary education” has accidentally been translated to a well known term instead, which unfortunately refers to longer schooling. E.g. in Swedish the term “grundskola” means 9 years of schooling, and in Norwegian the term “grunnskole” means 10 years. Readers of these translations will get the wrong impression that a majority of girls in low income countries complete nine or even ten years of schooling, which is absolutely wrong! In fact, only 34% of girls in low income countries finish seven years of schooling, according to recent Data from UNESCO-UIS: Lower secondary completion rate, female, % of relevant age group in Low-Income countries. We will correct this mistake in the upcoming re-prints of translated editions and we will also run a re-phrased version of this fact-question in public polls in the 14 countries in our study, explicitly mentioning “five first grades” in the question to see if this leads to different responses.

(Thanks to Aleksandar Kondic for pointing this out in our feedback forum here.)

CHAPTER ONE: The Gap Instinct

(The claim “this gives a better sense of reality” accidentally appeared before the wrong pair of charts. It was meant to refer to the third pair of charts showing overlapping bell-curves. Now on page 41. Thanks Christian Berggren for pointing out this mistake.)

(Democracy in the world has definitely been improving in the long time perspective, but the quality of democracy has been falling during the past 10 years, and therefor some readers have complained that we shouldn’t call it an “improvement”.)

Page 216, line 20-29: should read “For example, Mao was undoubtedly an extraordinarily powerful figure whose actions had direct consequences for 1 billion people. Most often when I show the low birth numbers in Asia, someone says “That must be because of Mao’s one-child policy.”

But the infamous one-child policy had less influence than is commonly thought. The huge, fast drop from six to three babies per woman in China, happened in the ten years preceding the one-child policy. During the 36 years the policy was in place, the number never fell below 1.5, […]”

APPENDIX: How Did Your Country Do? 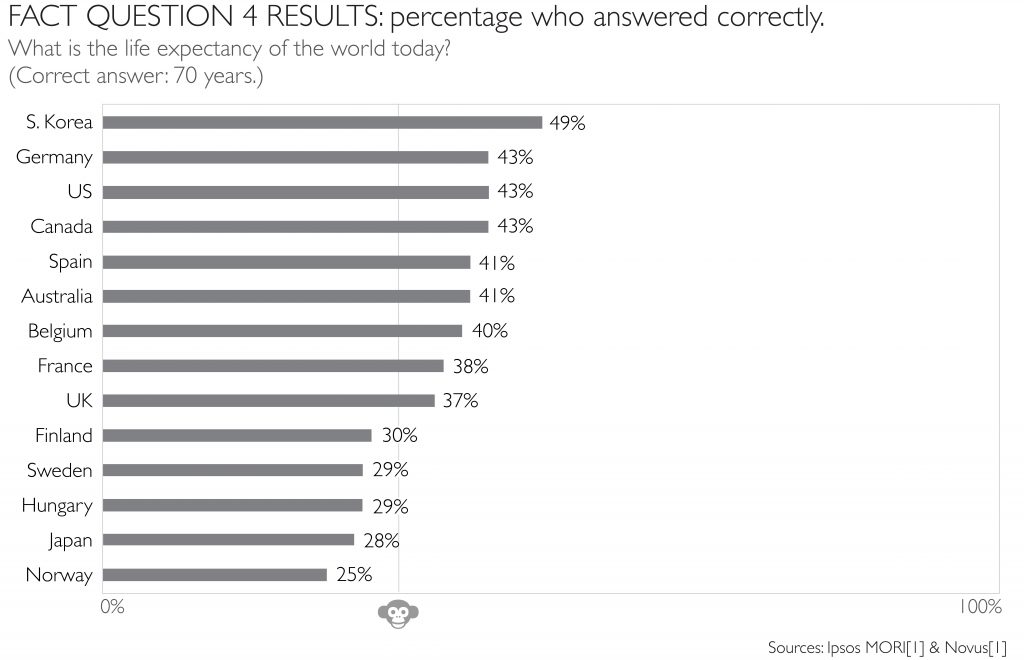