In 2018, 91% of children in Europe received the two full doses of the measles vaccine. More children in Europe are being vaccinated against this disease than ever before! Options A and B aren’t just wrong — they’re very wrong. 60% would have been the correct answer for Europe as recently as the early 2000s, while 30% was the global figure at around the same time. Over the last two decades, however, things have progressed substantially.

There are still gaps in vaccination in some countries — particularly among small communities, in the older population, and in areas in conflict. That’s why cases of measles have risen in Europe over the past couple of years (about 80,000 cases in 2018, compared to about 24,000 in 2017). Due to media coverage, people in Europe are very well aware of this, which is probably why they might think vaccination rates are lower than they actually are.

This time our German respondents scored best… if we can call it that! Still only 20% of them got it right. The United Kingdom came in second with 19%, while France brought up the rear with 18%. This isn’t exactly encouraging — more than 80% thought the proportion of European children fully vaccinated against measles was far lower than in reality.

Why do people pick the wrong answers? Because they think that if one thing is getting worse, then EVERYTHING must be getting worse! Clearly, people in Europe don’t realize that the vast majority of their children are getting the full two vaccine doses against this terrible disease. And ignorance about this fact is getting even worse as a result of news stories about the increasing number of measles cases across Europe (and the world). If cases are increasing, then the vaccination rates must be either low, or going down, or both… right? Wrong! The spread of measles is mainly due to issues related to confidence in the vaccine among fractions of the population, as well as logistical problems in areas where there is conflict. It’s not caused by a reduction in vaccinations overall. 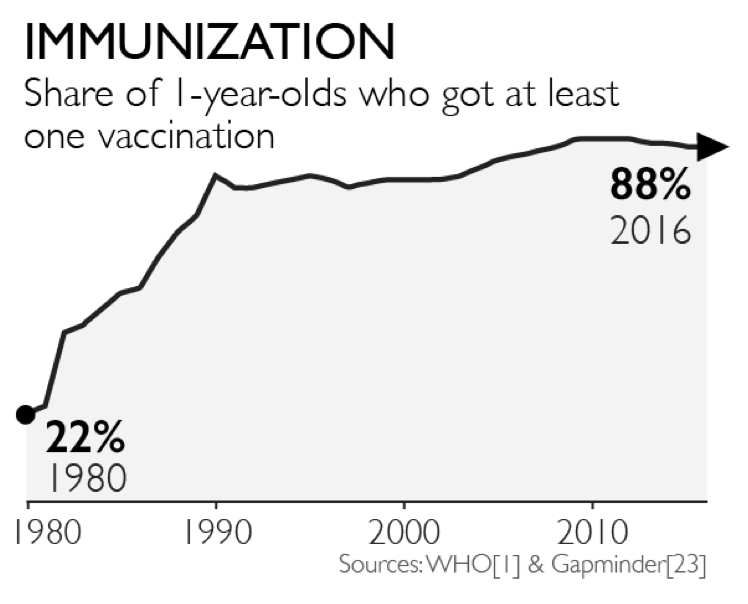