According to data from the International Disaster Database EM-DAT, the annual number of deaths from natural disasters like floods, earthquakes, droughts, storms, wildfires, extreme temperatures—including deaths resulting from mass displacement following disasters—is 75% lower than it was a century ago.

From 1907 – 1916, a little over 325,000 people died each year as a result of natural disasters. 100 years later, during the period 2007 – 2016, the average annual death toll had fallen to 80,386. Not bad, right? And it becomes even more impressive when you consider that the world’s population rose by more than 5 billion people during the same time period.

So in fact, we are now so much better at predicting, handling, and recovering from natural disasters that—despite population size and density being drastically higher—far less people die as a result of them each year. 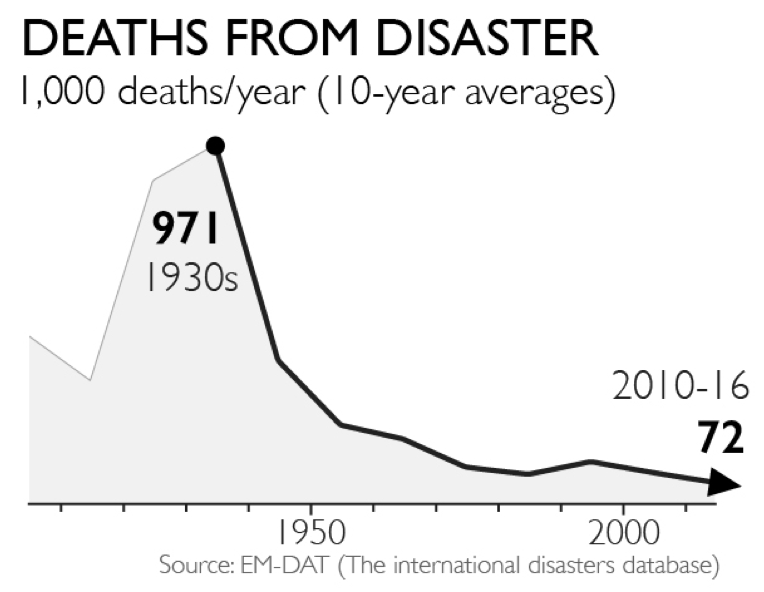 This time the best results (if you can call them that…) came from Finland, where a meagre 16% of respondents chose the correct answer—that’s slightly less than one correct answer for every six people asked. In joint last place, with just 3% correct answers, came France and Hungary.

We hate to keep pointing “the finger” at the media, but honestly it’s hard not to. Every death from natural disasters—from the earthquake in Haiti to Hurricane Katrina—is covered in intimate detail in every news outlet for weeks and weeks after it happens. Even years later, these events (and their death tolls) are routinely referenced by the media, charities, politicians, and educators.

And of course, there’s nothing inherently wrong with the coverage. It’s just that the constant stream of negative news stories that most people in the richest countries are exposed to leads them to develop the idea that “most things are getting worse over time”.

But they aren’t. In fact, most things are getting significantly better as time goes on, and that includes our ability to identify, manage, and recover from natural disasters.